Michael Jackson – The King of Pop, has never failed to impress his audience by any mean. Be it his songs, classic dance moves or his astounding costumes; he has always managed to win over the hearts of his fans. ‘Dangerous’ is a song of Michael Jackson, which was released as the fourteenth and final track of his album ‘Dangerous’. The song was written and composed by Michael Jackson. In the music industry, Dangerous was considered as a new jack song, which managed to make the audience go crazy. Dangerous was entitled as one of the greatest albums of all time.

Michael Jackson not only rocked the music and dance moves in his astounding piece of talent Dangerous, but he managed to slay the look as well. The costume that Michael Jackson was attired with for the performance on this classic song, made his fans go crazy. If you are one of the craziest fans of the King of Pop, then we are sure that you would love to get your hands on his Dangerous Costume, wouldn’t you? Below are listed the particulars of his costume that he was attired for the performance of Dangerous: 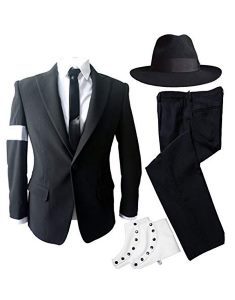 Michael Jackson always managed to hold onto the elegant personality that he had. He never failed to impress his audience. Along with his classic performance, he always stood up high with a shining costume and a bold look. The costume that he was attired with for his performance on Dangerous, comprises of his stunning black suit. The two-piece suit is made of wool blend fabric which ensures comfort and warmth. You wouldn’t even want to think twice before grabbing this outfit of the King of Pop.

The black blazer has a viscose lining on the inner side which serves you comfort on the inner side along with a stylish look on the outer side. The blazer has a lapel collar which leads down to one-button closure. The two flap pockets on the waist are accessorizing the look of the blazer. A white band is suede on the right arm. The pant on the other side has a straight fit and a zipper flyer closure. A white shirt, black tie and a black hat comes along to complete this costume with grace. 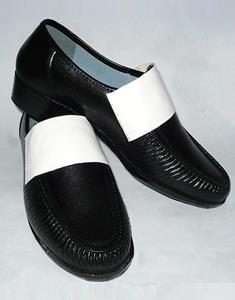 Footwear has always been essential for Michael Jackson, as he had to stood up for his classic dance walk and not to forget, the mesmerizing moon walk. The shoes that Michael Jackson has been wearing along with his black suit, are made of cowhide leather. The shoes come along with a comfy inner sole. The material of the shoes ensures long lasting durability. The shoes are accessorized with a white leather panel endorsed on the outer shell. The subtle ridges scheme on ramp are something to praise about the shoes. The deep-rooted out sole of the shoes makes them one of a kind and a pleasure to match along with the graceful black suit.